Public Response to this Site

The public support for this site has been overwhelming positive. 200,000 visitors in our first three weeks of operation is a testimony to this. Many of you have written in support, and described how you're using the site, so many that I'm overwhelmed with email. A few have raised some questions about the site that I'd like to address here.

When someone tells you that we shouldn't be publishing something, you should wonder what their motivation is. The difference between the "haves" and the "have nots" in the 21st century is not going to be about money, but information. This flow of information is critical in a democracy and permits each voter to form his or her own opinion about the matters which are important to us. To quote U.S. Supreme Court Justice Louis Brandeis:

This project's goal is to bring the truth (in the form of photographs) to the public.

A number of visitors have expressed concerns about our use of a helicopter and the effect on the environment. We are using a modern piston-powered Robinson R44, the safest and most efficient helicopter made today. It gets about 13mpg, approximately the same as most SUVs on the road today.

We're aware that we burn fossil fuels operating our helicopter, and sincerely believe that the environmental good that will come from this project far outweighs the bad. Furthermore, we have almost completely eliminated our use of fossil fuels in our terrestrial transportation by driving electric cars which we charge using our photovoltaic solar system.

We are aware that we have photographed a number of homes in the process of documenting the California Coast. The California Coast is a unique and beautiful place, and those people who have chosen to live on it have made the coast a part of their lives, and their lives a part of the coast. It should come as no surprise that the public at large would be attracted to view this beautiful place some call home. We have little sympathy for those who would feel that in order to enjoy the beauty of the coast that they must deny others access to it.

All of the photographs on this site have been taken from a public place and in compliance with applicable Federal and State laws. In 1986, the United States Supreme Court held, per Chief Justice Burger, that warrantless aerial observation of fenced-in backyards was not unreasonable under the Fourth Amendment (California v. Ciraolo, 476 US 207 (1986)).

"In an age where private and commercial flight in the public airways is routine, it is unreasonable for respondent to expect that his marijuana plants were constitutionally protected from being observed with the naked eye from an altitude of 1,000 feet."

Please be sure to review some of the highest resolution photographs before forming your own opinion. You cannot see much detail, for example, identify individuals or see into a house. It is our policy not to have identifiable individuals on private property photographed on our website. If you believe that you can be recognized in our photographs and this bothers you, please call it to our attention and the photograph will be modified to rectify this.

A very good book about how technology will affect the privacy of all of us is The Transparent Society: Will Technology Force Us to Choose Between Privacy and Freedom? by David Brin.

A number of visitors have expressed a concern that this site contains photographs of some locations that might be of interest to terrorists. We have thought long and hard as to whether the publication of these photographs is a real security risk that outweighs the enormous good that could come from this project. It is important that the project be a complete record of the coast, and it could not be if we redacted this material.

We do not believe that our publication of these photographs, in and of itself, creates a real risk because:


Furthermore, there are enormous reasons that the public should specifically be permitted to view these facilities:

I would be happy to discuss any new concerns you may have about the project.

We've been sued by Barbra Streisand, ostensively for invading her privacy while photographing the area of coastline which includes her Malibu home. For the full story of this litigation, click here.

Here are some of the rants that we have received and would like to share with you for your amusement. They have been reformatted to fit your screen.

This first rant was recorded by my answering machine. I'm not sure who the author is, but the Caller ID on my answering machine indicated a number of 707-538-2768 and name of Jeanette McFall. This lady really doesn't want to be on the Internet. If this is really Jeanette Lynn McFall of Santa Rosa, CA, age 43, she shouldn't worry, because I have no plans to photograph Santa Rosa. She should instead be concerned because there is a lot more personal information publicly available on the Internet than these photographs.

If anyone knows what this guy is talking about, please let me know. I haven't studied much geology. He would obviously make a great screenwriter of James Bond movies. Oops, too late. This seems like it is right out of the plot to "View to a Kill".

Likewise, I've always wanted to visit Cuba, and thought I would have to wait until after Castro dies. I have thanked the writer for his offer of media attention and offered our helicopter services to Mr. O'Reilly. As you can see from my portfolio, my wife and I are experienced aerial photographers:

There seems to be a common theme in these last two email rants. Quoting from my Diagnostic and Statistical Manual of Mental Disorders, Fourth Edition, usually referred to as the "DSM-IV", under Section 297.1 "Delusional Disorder", Subtype "Grandiose",


" This subtype applies when the central theme of the delusion is the conviction of having some great (but unrecognized) talent or insight of having made some important discovery. Less commonly, the individual may have the delusion of having a special relationship with a prominent person (e.g., an adviser to the president) or being a prominent person (in which case the actual person may be regarded as an imposter). [...]"

...but of course, I'm not a psychologist and I'm not qualified to make this diagnosis, and there are other preconditions (like the delusion needs to last a month) for the diagnosis.

Now that Streisand has filed her lawsuit against the site, the rest of the litigants are coming out of the woodwork. Here is a threat from Bruce Craig of Encinitas, California:

Since he speaks for members of the Seaside Preservation Commity [sic] we'd like to show you exactly what he considers "Preservation" (which according to my American Heritage Dictionary means "To keep in perfect or unaltered condition; maintain unchanged"). What is Mr. Craig trying to hide? 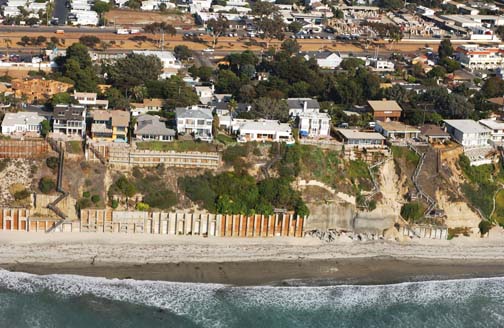 This is the photo that we believe includes his neighborhood

These have to be some of the worst looking seawalls that I have ever seen in all of my photography of the coast.

Mr. Craig continued to write me to express his anger at those who would enforce the law:

Mr. Craig -- there is one certainty -- the ocean will reclaim these homes, seawall or not. I just hope the taxpayers don't get stuck with the bill for cleaning up the rubble which is left.